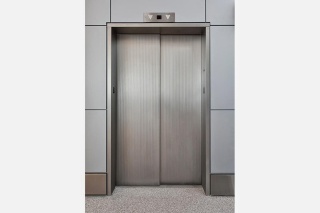 The first person I wished I were stuck in a broken lift with was an owner of a small stereo store back in the late 70s. I used to hang around the store where the very cool, very knowledgeable sound guru would answer my questions about Nakamechi, Macintosh, and “watts per channel.” I never seemed to understand what he told me since someone with money would always walk into his shop and he would walk away from me as if I was an eight track tape player before my understanding of some concept he told me would crystallized.

In college, I became enamored with a college professor. I would sit in the front row and try to understand everything he said. When I decided I didn’t want to share the professor with anyone else I would request a meeting in his office, but these sessions were always too short—even when I got him to agree to meet during one of his open periods.

This idea sounds strange, I know, and probably unhealthy to someone with claustrophobia or someone who is very withdrawn or shy. I am neither of those, but I am someone who tends to retain very little of what I hear or read. Knowledge I glean from a lecture or a book seems to vanish as if the information was a mere vapor. People close to me say that is because I am not really listening for content, but rather for entertainment. Hmm.

I have seen where fictitious characters in film have learned important things from being captive in an elevator with someone:

In the years since I graduated, I would read someone’s work or hear someone speak and immediately think of the broken elevator, but for the most part in the last twenty-five years, I really have not found myself confronted with someone I wished an intimate audience with—until lately.

After reading, “War Is a Force That Gives Us Meaning,” “Death of the Liberal Class,” “Empire of “Illusion” and his column in Truthdig.com, I thought I would like to be stuck in an elevator with the Pulitzer Prize-winning author Chris Hedges. But the preceding words are over two years old and things have changed in my life. I suppose I would still like to pick the brains of someone I have enjoyed reading, but seriously, who wants to be stuck in an elevator anyway. Would if the elevator is stuck because the building is on fire. Cooked as if in a Dutch oven!

To tell the truth, the only reason I posted this is to mark a significant change in me. The above was a work in progress back when I was writing my Jockomo blog; I guess I wanted to post it to show myself I have moved on. If you have stumbled onto this blog through a Google search and are now wondering just how batty I am well, pretty batty, but I am getting better!