As the subtitle of this blog suggests, I don’t review burger joints very often anymore. Also, now that I am almost as fat as I have ever been, I have made a couple of healthy half measures (I rarely stick to whole measures): cut way down on dairy and beef. The decision on cutting down on dairy is purely a healthy choice–I’ve replaced milk with vanilla soy and hope to go to almond or some other replacement for soymilk since I’ve been reading negative stuff on that milk substitute. I haven’t begun to look for alternatives for butter, cream, mayo yet. (So the cutting down on dairy is truly a baby step.) Cheese, what would life be like without cheese? My low-beef consumption decision has more to do with how the demand for beef–especially in America–is killing the planet. I would rant on about that, but instead, I’m providing one of many sources here if you care to investigate this very serious dilemma yourself.

While on this kick I picked up Rich Roll’s Finding Ultra. I’d love to tell my readers that when I was forty, I weighed 200 pounds (think heavier) and that within two years I was training for the Ultraman or Ironman Triathlon or the NorCal Spartan or even the less-challenging Sacramento Urban Cow Half-Marathon (nope, nope, nope, and not even), but at forty I was happily stuffing my face. I’m sixty and twenty quid past the two-century mark as my stressed scale tells me. I am interested in Roll’s book for some inspiration and information, that’s all. And since reading it I do think more about what I’m eating, but I’m my own worst enemy when it comes to personal fitness and healthy food choices. I love to eat, and plants are at the tippy-top of my perverted food pyramid. At least for now.

Last June folks from both sides of my family met up at Raley Field to celebrate my mom’s 85th birthday. It was quite an event. The matriarch rented a corporate suite and my brother popped for the refreshments. With beer bottles in hands cousins from my mother’s side and my late father’s side (presumably still thinking this blog was for the reviewing burgers) marveled at the fact that I had never been to a Five Guys. At one point one of the cousins whispered the driving directions to me as if she expected me to Uber it to the lauded grill and pick up a burger in between innings.

As it turned out, there is a Five Guys much closer than the one the cousin directed me to–only ten minutes away from the park. So when I decided to check out what’s the big deal with Five Guys, I opted for the one in West Sac. From my house, I can use a circuitous, but pleasurable route: from my South Land Park house take the River Road, cross the Freeport Bridge and take South River Road up into West Sacramento proper then Google Maps the rest of the way. 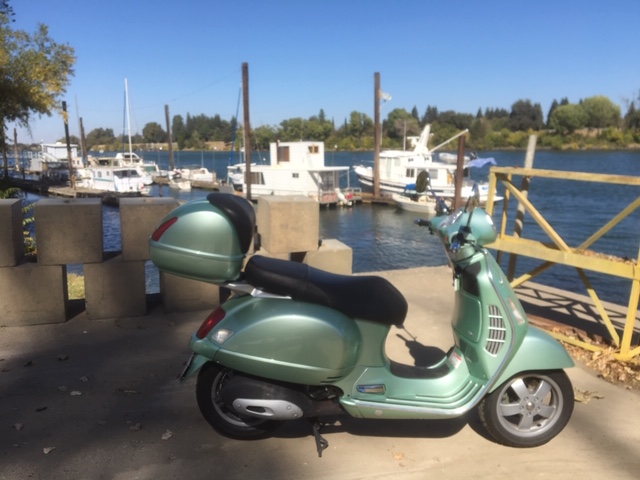 It had been a could of years since riding the River Road (California State Route 160). It is by far the best ride for a motorcyclist or scooterist in Sacramento. Winding roads that follow the Sacramento River down to the Delta. (If I was more serious about turning over a new leaf I would ride my bike there, but the streets are very narrow with no bike lanes.) If the rider doesn’t want to cut over the river at Freeport they can keep riding to the Old Sugar Mill, a place I have never visited, but seems worth checking out. A little further south and there’s Stone Lakes National Wildlife Refuge–another place this blogger has not seen but might be worth a look. Al the Wop’s is in the Walnut Grove area about a half hour from the end of Freeport Blvd and is known for excellent food and has some history to it. If this blog had remained a burger review, I would have covered it a long time ago. Keep in mind, all these places can be accessed much quicker by taking Interstate 5 South, but that’s not the point. The River Road is the event. The destination takes a backseat to the ride!

Anyway, if you have ever seen the colossal IKEA store in West Sac, that’s where the Five Guys store is. The first thing I noticed when I walked into the restaurant is that it looked very similar to an In-N-Out Burger. This is an important point–to me at least–because the cousins at Raley Field and every other burger booster I know who has sung the praises of Five Guys, inevitably compare the chain to In-N-Out Burger–not Smashburger, not Habit Burger, and not any other chain.

I ordered something called a Bacon Cheeseburger, which was two patties, two strips of bacon and two slices of American Cheese. (It’s sad that the most boring cheese on the planet is called “American.” Perhaps the French or the German’s invented it and named it as a joke.) I also ordered medium fries, an Oreo Cookie Pieces Shake and a small Diet Coke. Before you think me a complete pig, I ordered the Coke as a shake chaser so I wouldn’t have that aftertaste one gets after drinking a shake. I normally don’t order shakes unless I’m getting the order to go.

So did it meet all the expectations? It was a mixed bag. First, the shake was delicious. I didn’t finish it. Nor did I finish the Diet Coke. The fries were excellent and quite possibly better than In-N-Out if my memory serves me well. If I wanted to kill myself, a blind taste test of all these items could be executed with little hassle since there is an In-N-Out Burger spitting distance from the Five Guys. The same with the shakes. Five Guys has an In-N-Out Burger beat on variety, but vanilla shake to vanilla shake–that would be interesting.

So there I was, eating what tasted like a pretty good burger–with my fingers. Was it better than an In-N-Out Burger? Once again, I don’t know, but for sure it was too big. If I go to a Five Guys again, I’ll order the Little Bacon Cheeseburger. Ridiculous naming conventions! But why should I care, anyway? I can’t enjoy this shit anymore in my physical state and my age: while I was eating this stuff, I envisioned two people sitting across from me: my ex-doctor whispering, “Don’t love food that doesn’t love you back” and Rich Roll, the guy I have been reading. He’s just shaking his head and saying, “Man, you’ll never find Ultra the way you’re going, bro.”

Observations From the Mat #7: My New Folding Yoga Mat From Hell

Returning to the mat