I’m getting up there in age; things aren’t as tight down there as they used to be (Too much information? If so, the reader should go no further.). Too, while yoga has a way of working out the tight muscles it also has a way of working out other things–like gas. It happens to many practitioners. It’s all over YouTube.com. (See below.) It happened to an attractive older lady who often practices behind me in the classes I take. It has also happened more than once to the guy in shaded glasses who’s mat is often next to mine. Shit happens–er, well close enough.

So on the rare occasions when I hear toots, farts, poots, or whatever you call them, in class, it usually breaks my concentration, and I think, “Oh, that’s embarrassing.” It has happened to me before, but I was in some posture close to the mat so at the last second I was able to quickly sit on it like falling on a grenade. Did anyone else hear it? I guessed not.

Usually, I get a warning, and when I’d feel one coming, I’d go into DNF (Do Not Fart) mod tossing the Soham mantra out of my mind, tighten my ass cheeks, and concentrating on imploding the thing before it escapes to my utter embarrassment. I doubt this shift in concentration benefits my practice, but it is an emergency. When my lower GI somehow deals with the bubble, I go back to my mantra. Sometimes it never does, and I think to myself, can I let it go when everyone is saying “Namaste” at the end of the practice? No, I put away my mat, blocks, and blanket, waddle into the men’s locker room and dispatch the bad wind, but what if I can’t control one? What if one gets away from me?

Last Thursday night that is exactly what happened. 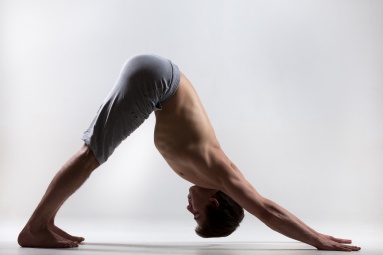 I didn’t feel it coming. There was no time to go into DNF mod. Worse, I was in Downward Facing Dog–probably the worst possible posture to be in when this happens. (You don’t know why that is a critical position to be in when DNF mod is not engaged? See the embedded image.)

I suppose I could have had this accident without ever stepping on a yoga mat. Flatulence increases with age. Digestion slows down, and food moves through the gut more slowly creating more gas. It probably does not help that I’m a walking CVS, with my anti-seizure meds, thyroid med, statin, and maybe even the supplements I take to combat the number some of the meds does to my bone density plays a part.

Finally, there’s my Hoover-like eating style: I’m probably taking in too much air as I rip through my meals. It is ironic that this blog started, in part, as a review of local hamburger joints, but I eat so fast I often would forget to really taste the thing I was supposed to be evaluating. Add to this cocktail the spinal twists and other asanas of yoga probably work as a flatulence accelerant–like gas on the smoldering fire, this is my fart factory GI system.

After the practice, I skulked away, took a shower and quietly left the club. As I exited the building that night, my yoga teacher was sitting near the bike rack as if waiting for me. We immediately struck up a conversation first about bicycle commuting and then yoga. I kept thinking he was going to give me some comforting words about farting during practice which would have been horrible. He didn’t, and I appreciated that, but I still wondered why he was ready to ride off but was sitting there like he was waiting for someone.

Like most of the yoga practitioners at my gym, all those YouTube video yogis, and in the glossy pages of Yoga Journal, it looks like a pastime for younger people–though I know that is not completely true. I still feel a little older after Thursday night’s event. I told my wife after I heard my first “yoga fart” a couple of years ago that if that ever happened to me I would immediately stop group practices and buy a Seane Corn or Rodney Yee DVD and start my home practice. It is turning out that I think I can show up Thursday without feeling too embarrassed. Too, I attempted a home practice a few times and found, if I don’t have somewhere to go I’ll find an excuse to watch TV. I’m not sure what I’ll do if I break wind during my Tuesday Noon class, though–that’s at my job and everyone knows me. Good lord!

Over the years I have spoken to older men who will break wind in mid-sentence and without shame say, “Excuse me,” and go on with what they were saying as if they sneezed. That’s the future me, I guess. I hope I can pull those unfortunate events off with the same grace and nonchalance. If so I may end up a master yogi, and also, I’m afraid, a great breaker of wind.

One thought on “Observations from the Mat #4: When the inevitable happened”

Observations from the Mat #5: Practicing with a hot yoga teacher

How clueless the privileged are

Imagine Trump, but without the money