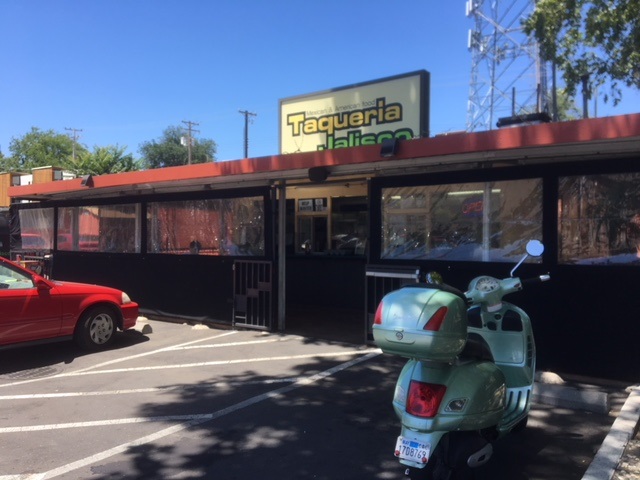 My friend and fellow blogger Chip told me as we were driving out of Downtown Sacramento last Wednesday night that the taco stand we were passing served his favorite hamburger. I looked at the sign as we drove by, Taqueria Jalisco. His statement and the stand’s name were incongruent. Did he mean his favorite Torta? Nah, if he said the hamburger, he meant it. Anyway, there are plenty of ethnic restaurants that serve other types of food.

As it turns out, Taqueria Jalisco states it is a Mexican and American food restaurant. When I pulled up to the stand the following Saturday it as much right on the sign, I just couldn’t see it when we were going past it at forty miles an hour. The menu didn’t have very many American-style items, but it did feature five different hamburgers. None of them exotic: Burger, Cheese Burger, Bacon Cheese Burger, Double Cheese Burger, and Pastrami Cheese Burger. 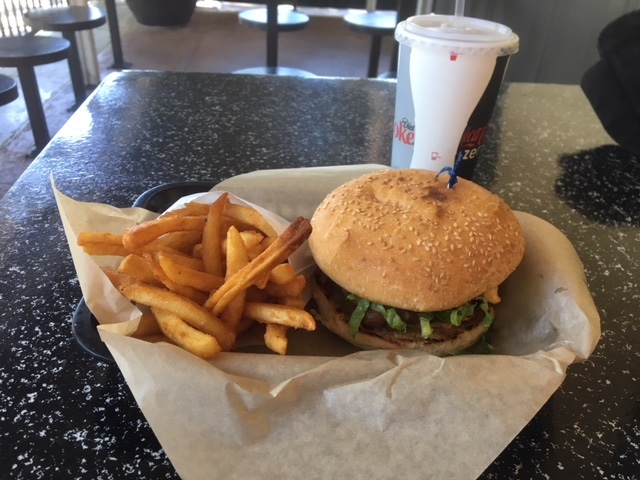 I ordered the Bacon Cheeseburger (I can’t handle the parsing!), along with fries, and a Diet Coke. Unless I missed it, their french fries are not on the menu. I did find Carne Asada Fries and wondered if they are as good as the Flaming Grill Cafe’s offering, but didn’t want to go there today.

Someone told me Taqueria Jalisco sells the only real tequila in town. I don’t drink and when I did, I only had one shot of tequila and that was enough! I don’t know what”real” tequila is–I’ve seen enough bottles of the stuff and have never seen a label that said “fake tequila,” “imitation tequila,” or “synthetic tequila.” I asked a drinker of the stuff, and he told me Taqueria Jalisco serves Tequila Tapatio, Casamigos Reposado, and Cazadores Reposado. My drinker continued, “Like champagne, true tequila is made only from fermented blue agave. Unlike champagne, tequila isn’t specific to any one region, as agave plants are fairly hardy.” He also sent me this nugget of Mexican trade law: “Mexican laws state that tequila can only be produced in the state of Jalisco and limited municipalities in the states of Guanajuato, Michoacán, Nayarit, and Tamaulipas.” So, I got educated on something that I really don’t care about and I question whether anyone who reads this post cares, as well. Aside from tequila, the joint also serves Irish whiskey, various alcoholic drinks, Voss, that ridiculously over-priced Norweign spring water, and fountain drinks, like the Diet Coke I’m drinking. Okay, enough of the booze interlude. On with the review of the burger.

Taqueria Jalisco’s Bacon Cheeseburger consists of what I believe to be a 1/3 lb. beef patty, cheddar cheese, bacon, mayonnaise, Thousand Island dressing, lettuce, tomato, pickles, on a “specialty bun.” If it sounds pedestrian, I would typically be with you, but wait until you taste it. The beef has a high-fat content (translation: it is juicy and flavorful).

Sure, there isn’t anything ground-breaking or experimental: no Gruyere cheese, no smoked paprika, no cilantro aioli, and the burger isn’t topped with a fried eye. And while I don’t think it matches Scott’s Burger Shack’s Fat Boy–another not-so-fancy burger that hit’s it out of the park–it is an excellent traditional burger. This burger is the kind of you would be served in a small backyard barbecue hosted by someone who really loves the traditional hamburger, loves it big, and doesn’t skimp on the ingredients (though I wonder why no onions). The bacon looked and tasted like the buyer bought it for himself–he didn’t skimp! It was thick, not fatty, and probably not cheap. The bun–specialty or not–was rugged enough to not dissolve by all the juices. There are fancier burgers available in Sacramento, but this was one of the best at least in the None Designer Catagory. (Yeah, I just made that up.)

Finally, a word about the fries. I didn’t ask the guy at the window, but the fries seemed to be battered. They had that crunchiness that is reminiscent of the way Cod, or Calamari is prepared at a good fish and chips place. I love these kinds of fries. There was no need for ketchup.

I will definitely return to Taqueria Jalisco–it is close enough to my house I can get my family in on this. The dilemma is, do I try the Mexican food that looks so good (street tacos!) or maybe I order the bacon cheeseburger again. Decisions, decisions!