I had heard of Arundhati Roy and her novel The God of Small Things when it was published back in 1997. I had long forgotten why the book interested me. I was a newly-minted Christian at the time, so maybe the provocative title with “God” in it made me want to check it out. I probably jotted the title down for future reading on the bookmark I was using at that time. That was my pre-Goodreads.com method of keeping a list of books I wanted to read. That approach wasn’t advantageous. (Somewhere out in the world, there are a dozen or so deteriorating New Yorker and QPB Book Club bookmarks with book titles scribbled on them.) It took the recent publicity of her 2017 book The Ministry of Utmost Happiness–glowing reviews and fascinating interviews–to remind me of the author’s previous award-winning novel and my interest in it. In between these two critically-acclaimed works of fiction are twenty years and eighteen non-fiction publications and activism.

When I started reading The Ministry of Utmost Happiness, I immediately fell for Aftab, a Shia Muslim hermaphrodite born in Old Delhi, India. As she reaches adulthood, she has gender reassignment surgery and becomes Anjum, a glamorous, affectionate woman. Anjum moves into a house called Khabgah (or “House of Dreams”) with the group hermaphrodites and transgenders. Anjum later leaves Khabgah and moves into a nearby cemetery where she transforms it into a guest house, called Jannat (or “Paradise”), and creates Jannat Funeral Services. Jannat Guest House becomes home to other marginalized and persecuted characters like herself. This, I believe, is where Roy gets the title to the book. The significance of the cemetery is that in India graveyards are usually for Muslims. Hindus cremate their dead, and so these sites become ghettos of sorts since Muslims are the minority and have been pushed to the bottom of the economic and social chain.

But this is only the beginning of this beautiful and brutal braided narrative covering many decades of often bloody struggles and strife. The story moves back and forth in time and geography: Delhi to Kashmir, from the 1990s to current time dealing with the hypocrisy of the caste system to the Kashmiri separatist movement that called for the Muslim-majority Kashmir to break from Hindu-majority India.

The West often thinks of India as the land of yoga, meditation, and Gandhi. However, Roy said in a recent interview with Jeremy Scahill of The Intercept, “There has not been a single day since August 15, 1947, when India was declared independent that the Indian Army has not been deployed within its own borders, against its own people…It’s just a nation that is nailed together by military might.” As an American who never studied the history of India, Richard Attenborough’s version of Mahatma Gandhi’s life is the most background knowledge I have on the subject, so the stuff in this book had some shockers. (By the way, if you have fifteen minutes, check out Roy setting the record straight on Gandhi here. It was news to me!)

Roy dedicated the book to “The Unconsoled,” and that would apply to the characters in this book if they were alive. They don’t fit neatly into the complex grid that is India. An India “that is divided into this tiny little fretwork of caste and ethnicity and language and each is pitted against the other,” as the author told Scahill. A humous example of this is contained in a joke that militants passed around on their mobile phones:

Forgive this blogger’s indulgence. The joke was too funny to not reproduce here. It is also the only time while reading the book that I laughed out loud. So, the passage misrepresents the work as a whole, but the punchline fits with much of the novel’s text. Still, there are beautiful love stories here amongst the massacres, lynchings, and tortures. The fact that Roy can effectively reveal love and tenderness in this kind of landscape is her genius.

When interviewed by Amy Goodman on Democracy Now! Roy said, “Fiction in reality as well as in my imagination is my real home, but this time it is home with the roof blown off.” Indeed, at times The Ministry of Utmost Happiness seems like it is rubble where home used to be. I, for one, am grateful for the storm. I found The Ministry of Utmost Happiness a tough read, but worth every challenging page. 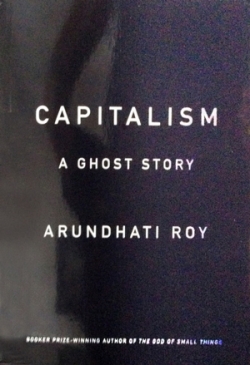 Capitalism: A Ghost Story is about neoliberalism, racism, the privatization of public works, and pollution run amuck, and the wreckage unfettered capitalism leaves in its path. There are Kashmiri separatists, anti-government Maoists rebels in the jungles fighting against the government that wants to strip the forest for mining operations and massive privately-owned dam projects threatening to wipe out hundreds of poor communities. Scary shit, indeed!

Roy spends much of the ink here on the evils of foundations. It is fascinating in a very dark way how foundations have a history of “defusing and deradicalizing” movements like, for instance, the Black civil rights movement here in the 1960s and the “successful transformation of Black Power into Black Capitalism.” Roy writes:

“The Rockefeller Foundation, in keeping with J. D. Rockefeller’s ideals, had worked closely with Martin Luther King Sr. (father of Martin Luther King Jr.). But his influence waned with the rise of the more militant organizations—the Student Non-Violent Coordinating Committee (SNCC) and the Black Panthers. The Ford and Rockefeller Foundations moved in. In 1970 they donated $15 million to “moderate” Black organizations, giving people, grants, fellowships, scholarships, job-training programs for dropouts, and seed money for Black-owned businesses. Repression, infighting, and the honey trap of funding led to the gradual atrophying of the radical Black organizations. Martin Luther King Jr. made the forbidden connections between Capitalism, Imperialism, Racism, and the Vietnam War. As a result, after he was assassinated even his memory became toxic, a threat to public order.”

Foundations “remodeled his legacy to fit a market-friendly format.” The Martin Luther King Jr. Center for Nonviolent Social Change, with a grant of $2 million, was set up by the Ford Motor Company, General Motors, Mobil, and Monsanto, among others. The center maintains the King Library and Archives of the Civil Rights Movement. We rarely hear about the radical, socialist King. All we easily remember (unless you look for his late speeches or read Tavis Smiley or Cornel West) is the “I Have a Dream” speech, the non-violent protests, and the Martin Luther King, Jr. Memorial in D.C. Stuff that corporate and middle American can easily ingest.

Capitalism: A Ghost Story is a sharp rebuke of neoliberalism and multinational capitalism. Her in-depth writing reminds me of Howard Zinn, Noam Chomsky, Naomi Klein, and Chris Hedges. I can’t always wrap my head around what she is saying. That’s alright though–I would prefer to be challenged than jaded.

The last book I read was Roy on mass government surveillance. Things That Can and Cannot Be Said is a collaboration with American actor John Cusack and is, for the most part, nothing new. Roy and Cusack fly to Moscow with Pentagon Papers whistleblower Daniel Ellsberg to interview NSA whistleblower Edward Snowden. The interview turned out to focus on Ellsberg as much as on Snowden. Most of the book is interview transcripts, the first part of it between Roy and Cusack alone and the second half the co-authors with the famous whistleblowers.

Snowden seemed to add little new information to the conversation. Roy questioned Snowden over the controversial Wired Magazine September 2014 cover. Snowden gave a flippant answer. Presumably, because he has fielded that question too many times already. To me, this was a missed opportunity. Snowden–like Ellsberg–entered the armed forces and later the government because he wanted to serve. Like Ellsberg (and for that matter Chelsea Manning, Thomas Drake, et al.) he was not a radical. I might be reading in between the lines here, but I felt Roy was disappointed in the Wired cover pic. She has been quoted as saying, “Flags are bits of coloured cloth that governments use to first shrink wrap people’s brains and then as ceremonial shrouds to bury the dead.” My guess is she felt that Snowden was falling back on a banal patriotic trope and she wanted a clear answer from him and what she got was frustration.

I gleaned more from the Ellsberg comments. I hadn’t visited the Pentagon Papers scandal since college, so some of what he had to say refreshed my memory. One of the more chilling comments came from Ellsberg. I have heard others comment on this, most notably Chris Hedges, though Ellsberg broke it down to how it would all happen:

“We don’t have a police state, not yet…One more 911 and then I believe we will have hundreds of thousands of potentials. Middle-easterners, Muslims will be put into detention camps or deported. After 911 we had thousands of people arrested without charges, but I am talking about the future…I’m talking of hundreds of thousands in camps or deported. I think the surveillance is relevant to that. They will know who to put away. The data is already collected.”

Ultimately, Things That Can and Cannot Be Said was a rehash for me. All the stuff I have read about since the initial story from The Guardian broke and then the interviews and articles that have come in its tsunami-size wake.

What to read next by Arundhati Roy–Walking With the Comrades where Roy traveled into the forests of Central India where Maoist guerillas confront some of the world’s biggest mining corporations. Or maybe The Doctor and the Saint where Roy attempts to replace Gandhi with Ambedkar as India’s preeminent modern figure. Wait! Minutes before posting this I bought An Ordinary Person’s Guide to Empire–a book that has been described as “a call to arms against the apocalyptic apparatus of the American empire.”

I’ll probably just take a break from Roy for a while. She is an excellent writer and a great thinker, but like Chomsky, Hedges, and Klein, a little too sobering to take in large doses. Still, I just may get around to reading The God of Small Things sooner than later. I wonder what other titles are on all those lost bookmarks.

Roy with the Maoist guerillas.