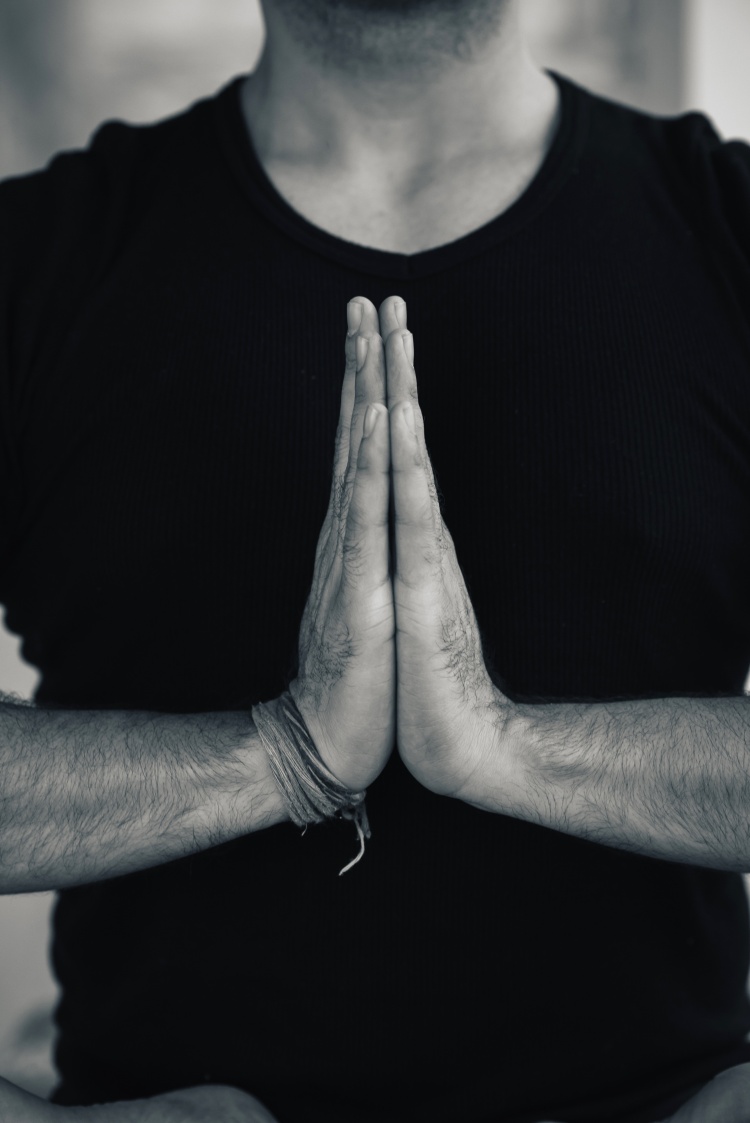 The first time I ever heard the word “Namaste” was–fittingly–at the end of my very first yoga class. The teacher said it and the class repeated it back to her. I instantly liked the word. It sounded as if it was the perfect word to say, our heads bowed, sitting with our legs crossed Indian style and our hands in prayer pose.

For all I knew, namaste could have meant “Go fuck yourself,” but it didn’t. After I rolled up my mat and put it away with the blocks and blanket, I put on my flip flops and walked over to the teacher to say, “Thank you for your practice,” like everyone else was doing, but I also asked what namaste mean. She gave me a warm smile and said it was Sanskrit for “The light in me celebrates the light in you.” If she had said something like “goodbye” or “until next time,” I would have been disappointed, but she didn’t. The word meant something as beautiful as the sound of the word.

I spend much of the time in the shower at that gym surrounded by a bunch of naked men with a smile on my face thinking of namaste. I toweled off and got dressed singing my own namaste song. I said it out loud all the way home on my scooter–my helmet reverberating with the sound naamaaastaaaaae.  Why did I love and still love the word so much? I think it’s one of those words you can say while shaking a hand, hugging, or making love and know that it would fit perfectly for those occasions. For any truly heartfelt occasion.

For me, the English language doesn’t have a word with the emotional punch as namaste has. As a Christian, I cannot find an English word in the faith that compares. If I go to the common Greek words used in my faith, I run into trouble: “Agape” is beautiful in its meaning, “the highest form of love,” but it doesn’t sound like that. It brings up the image of a small aquarium fish–like the kind I bought for my son Peter when he was a kid and after it died I flushed down the toilet only to find just before it disappeared it was feigning death. (Sorry, “Dak Dak the Pirate Snake.”)

Recently, I learned the impossible Greek word “koinonia,” which means, roughly, “communion” or “joint participation.” My pastor decided to liven up our weekly church schedule, changing our Sunday Evening Service and our Wednesday Prayer Meeting to two in-home Bible studies: the Sunday Evening Service became Koinonia Central Bible Study, and the Wednesday Prayer Meeting become Koinonia East Bible Study. As the person who creates the church bulletin every week, I need to spell this word correctly and often. I didn’t–many times–and then, finally, I did. Copy & Paste is a lifesaver.

Hebrew has some words that are easier on the tongue than the above Greek. I have a Jewish yoga teacher who rarely says Namaste at the end of practice, but often says “shalom,” which means “peace” among other nice things. There’s also the lovely-sounding word “Shiloh” which means “a place of peace.” I loved this word before I know it was Hebrew. My mother–a big Neil Diamond fan–used to play this song, among others, when I was a kid growing up. Finally, I would say Immanuel, “God with us,” is nice, but before I was saved I worked in an independent cinema, so my first expose to Immanuel was “Emmanuelle,” a French erotic film. So when the word gets thrown around in sermons during the Christmas season, I have to stay focused, if you know what I mean.

I practice yoga four times a week, so I hear a lot of other Sanskrit words, but, except for Shavasana (Corpse Pose) or the root Asana (pose or posture), I have never consigned any other Sanskrit word to memory. Part of this is because I’m lazy, but also no other Sanskrit word has the same hold on me as Namaste does. Perhaps it is nothing more than it being the first new word I heard after my first yoga class–a class that made me feel better than I had felt in years.

Recently, I was buying lunch at a bodega when I noticed a sign on the counter. It said: “Namaste” followed by a longer English translation than the one at the top of this post–the only translation I have ever known. Instead of “Thanking you” I said “Namaste!” to the woman who bagged my lunch. I immediately felt embarrassed as I left the store. Still, I  shook off the shame and smiled. It was nice to see the word outside of my practice. A few months later I would widen my usual tunnel vision and see that on the front of that building, the signage had changed from the old name (Tootsies) to Namaste. I thought the stand was just a nice gesture. I guess not. Some marketer probably thought it was a good hook. And that, ladies and gentlemen, is how you can sully a truly beautiful word.

Me likey cheeseburgers, me likey scooters, me likey books, me likey cinema (fancy word for movies), me political junkie, me card-carrying member of the Democratic Socialists of America. View more posts