About nine months ago, I put down the book I was struggling through and made the transition to audiobooks. I did not take this move lightly; in fact, I am a little embarrassed by it. It is not that I have never listened to an audiobook before. 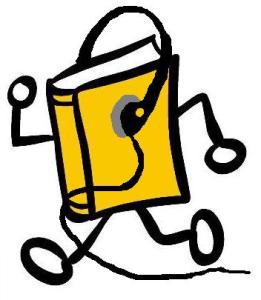 Even a voracious reader like my wife chose to buy the audiobook version of David Sedaris’ Dress Your Family in Corduroy and Denim instead of the paperback. After reading the brilliant Me Talk Pretty One Day, my wife decided to purchase Sedaris’ next book in an audio format just to hear the author’s voice. Although the material wasn’t as good as Sedaris’ previous book, his dry, effeminate voice, replete with hilarious impressions, actually made the audiobook funnier than his earlier work. Before officially making this move I had already listened to the Sedaris audiobook as well as Jeannette Walls’ The Glass Castle, Carlos Ruiz Zafón’s The Shadow of the Wind, and Johnson and Blanchard’s Who Moved My Cheese?. However, my reading problems hadn’t reached such a serious level during the time that I listened to these books on audio CDs.

I have suffered from poor vision throughout my life—I have one lazy eye and elements of both far- and near-sightedness in my dominant eye. I recall my nearsightedness as far back as first grade when I could not see the words on the blackboard. Since I didn’t care much for school, I really didn’t think that sitting in the front row throughout my elementary years was a problem I needed to be concerned with. It wasn’t until a family trip to Disneyland while I was in high school that I realized I had a problem. I remember scoffing at a sign on an empty amphitheatre stage. “Check out the lame rip-off band ‘Doobie Gang,’” I said to my brother. He gave me a puzzled look and said, “It says “Dobie Gray.”

A few years later, I managed to squeak by my first of many vision tests at the DMV. While my “good” eye gave me grief, my lazy eye turned out to cause bigger problems than my inability to get dates. In college I had to read multiple chapters of textbooks every week, I discovered I was not increasing my reading speed, despite Evelyn Wood and other resources, since I was reading with only one eye. Experts told me that this condition was permanent, in terms of my reading speed. My monocular reading condition causes an extra strain on my dominant eye, so I get sleepy easier than most and suffer from headaches during long nights of cramming.

Over the years, I have read many books that I absolutely loved, yet I fought a seemingly endless battle between concentrating and snoozing. Moreover, the older I got, the harder it became to finish books. A few years ago, I started the depressing trend of not finishing books after the first 20 to 50 pages. While some may argue that there is nothing wrong with this habit—perhaps I have become more discerning with and protectiveed of my time, I knew better. Some of these books were quite engaging. The physical task of reading became too tiring for me, and I was annoyed that I could only cover three to five pages before nodding off. What’s worse, I usually ended up embarrassing myself and others, snoring away on the living room easy chair while my sons had to make excuses for me to their girlfriends (I snore loud enough to rattle the windows.)

I started out reading the paperback versions of The Shadow of the Wind and The Glass Castle. After only about a chapter in each I cut over to the audiobook versions and realized that I could consume much more text through my ears than through my eye in a given amount of time. Still, I continued to buy and borrow traditional books instead of audiobooks. It wasn’t until I found myself plodding through Tim Holland’s wonderful Rubicon that I realized I should stick with audiobooks. Alas, the acclaimed British author’s book is not available in audio format on this side of the Atlantic.

In the time it took me to read halfway though Rubicon, I have listened to Barack Obama’s The Audacity of Hope, Erik Larson’s The Devil in the White City, a collection of short stories by Philip Dick, Steven Pressfield’s Killing Rommel, Malcolm Gladwell’s The Tipping Point, Orson Scott Card’s Ender’s Game, and most of William Young’s The Shack. (I couldn’t finish that one—it’s horrible!). At this rate, I am sure I will also complete Jose Saramago’s beautifully written Blindness before I finish Holland’s book. I think it is realistic to say I have shelved Rubicon, though it pains me to admit this. In between all these audiobooks, I have also listened to countless recorded sermons, books from the Bible, and a horrible audio class on the Apostle Paul that I purchased through the otherwise wonderful resource, The Teaching Company.

The obvious reason why I now can consume so much literature, compared to when I was reading, is that listening to audiobooks and other audio materials liberates me from the task of holding a book up to my face. I listen while I am commuting, during slow times at work, during my workouts, at bedtime, as well as when I usually would read, sitting at home or while I am taking my lunch at work. You may argue that many, if not all, of the activities mentioned above can be used to read, and I have tried them all, only to arrive at a similar dismal outcome. I often see someone I know from work at a local restaurant—his head always in a book. I also see my fellow commuters reading on their way to or from work, and I notice fellow health club members on elliptical machines employing the book holders while working out. What I’m talking about is using all this time—just about every free chunk of time I have. Of course, I could use some of the more sedentary times to actually read (at home after dinner, during lunch, etc.), but that only starts the read-snore-read-snore cycle again. I have relegated reading time to doctors’ offices and other bits of free time. At this rate, I doubt I will ever finish that book.

One of the drawbacks of listening to books is that you end up tuning out the rest of the world. As bad as the world is becoming, that would seem like a good thing, but not always. When I don my earphones and iPod, people with whom I usually see and greet on the street act as if I don’t want them to bother me. Although untrue, the earphones must send this message, since people on the bus who usually sit near or next to me just smile and look elsewhere. I felt isolated when I first started listening to books during my commute to work. Later, I began speaking up to my fellow commuters when wearing my headphones. I have had many lively conversations in the past with these folks and don’t want to jeopardize our relationship over my wearing headphones. I realized that I may be giving them mixed signals. I’m still working this out.

Another very different drawback to audiobooks is the recording quality. One rarely finds a book where the font is obtrusive to the story, but an audiobook can be poorly narrated or perhaps dramatized in a way that detracts from the story. The biggest drawback to audiobooks is that so many titles are only available in an abridged version. It is a sacrilege to consume an abridged version of Melville’s Moby Dick or Dumas’ The Count of Monte Cristo, but abridged versions of these works are available in both traditional and audiobook formats. The problem is that sometimes the audiobook customer has no choice but to listen to an abridged version. I listened to abridged versions of Obama’s The Audacity of Hope and Larson’s The Devil in the White City. I didn’t feel good about this, but the abridged versions were all my sources offered in these audiobooks. Initially I got most of my titles through the library, which limited my choices. I now have an Audible.com account, but I do not enjoy paying $15 per book each month for the service.

I have now finished Blindness and have moved on to listen to Jack Kerouac’s On the Road and Ravi Zacharias’ Recapture the Wonder, which I am listening to with my wife at bedtime. She has taken an interest in audiobooks, ironically to help her fall asleep. I originally read On the Road in college, and now I am revisiting this classic twenty years later—something I never would have done without the audiobook format. I have been considering a new, more robust iPod—my Shuffle is difficult to navigate without a screen. At the rate I am going, I will soon have an iTunes library of audiobooks to rival my buckling bookcases.